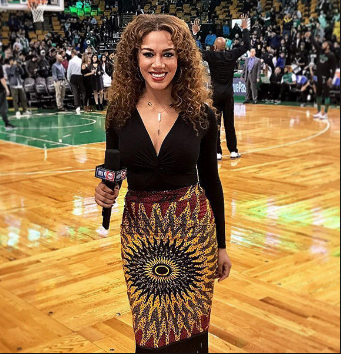 Rosalyn Gold-Onwude in 2017. Photo via http://www.liveramup.com

Ros is definitely my top favorite female in sports media right now. She has created such an amazing path for women in journalism. She has this dope swag, she’s not afraid to ask any type of question and she is so comfortable in front of anyone! Her down to earth personality makes her very relatable on and off camera, a goal of mine is to meet her one day and pick her brain a little bit.

Gold-Onwude, from Queens, NY, moved to the Bay Area and played for the Stanford Cardinals from 2005-2010. She played in three Final Four Tournaments, two national championships and led the team to win four conference titles as their starting guard. (https://pac-12.com/bios/rosalyn-gold-onwude) Did you know Ros played on the Nigerian National team in 2011? They advanced to the Fiba-Africa Olympic Qualifier tournament.

Following graduation Ros worked a couple ESPN games which led her a gig with the Santa Cruz Warriors. She then moved to the Bay and worked with the Golden State Warriors for three seasons. While she was with the Warriors their game and fame increased, they won two titles in three championship appearances.

Ros is now working with Turner Sports, reporting on the PAC-12, WNBA, Olympics and all things in between. She’s constantly changing the game for female journalists day by day. I could go on about her skills, positive attitude and drive, but you’d get bored of my admiration for her. I love her vibe and I know she is a fantastic role model for girls and women (like me) to look up to.

This article on her is one of my favorites, I mean check out her Twitter header, she was featured in Radiant magazine with a beautiful photoshoot.

“When I come onto the screen, I want to talk to you like I’m talking to my friends about basketball. When I come to speak to a coach or the players, I’m just a girl who enjoys basketball who’s here to talks hoops with you. And it’s nothing more, nothing less.” (Pilloton, M; http://www.goldengatesports.com)