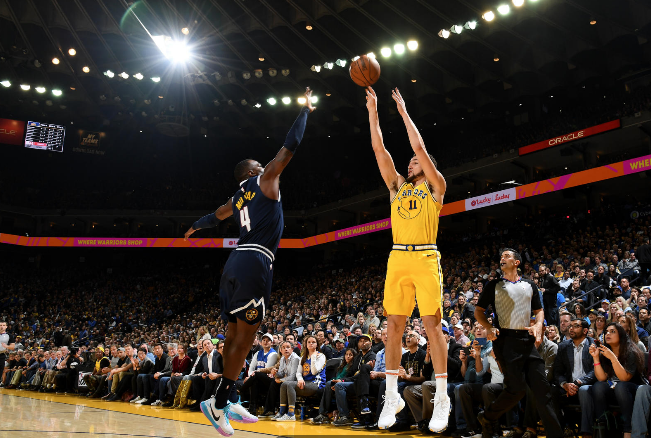 April 4, 2019 – The Warriors played a fantastic game Tuesday night against the Denver Nuggets who are one game behind the Warriors this season. The Warriors won by 15 in the end.

It feels like the Dubs finally have their rhythm back, and it’s probably because the playoffs are right around the corner. DeMarcus Cousins (28 points, 13 rebounds, 5 assists) was on fire offensively and defensively. He was aggressive under the basket and he hit a couple threes from the arch. Definitely an improvement from how he started the season.

Kevin Durant (21 points, 6 assists) was ejected early in the third quarter first for his reaction to the foul and second for using foul language against a referee. Durant now has 15 technical fouls, one more and he’ll be suspended for a game 😓

“Kevin attacking the rim got the crowd into it even more,” Klay Thompson said. “That was unbelievable. No one was trying to get in the way of that second dunk he had. That was ridiculous.” (AP, ESPN.com)

This game looked like the first one Durant enjoyed the entire season, in my opinion. In the first half he was dropping dunks back to back, he took open threes and he was SMILING people. It just felt as if he was ready for a victory. I know he’s mentioned in the past that the team is too good for regular season games and he’s “ready for playoffs.” But we all know you have to play 82 games to get to playoffs.

Steph Curry (17 points, 5 assists) was his electric self again, and he mentioned that he just got contacts? So that helped the vision problems he’s had all season 😂 he cracks me up.

Tonight the Warriors take on the LeBron-less Lakers in LA; I’m 99.99% sure the Dubs will come back to the Bay with a W.