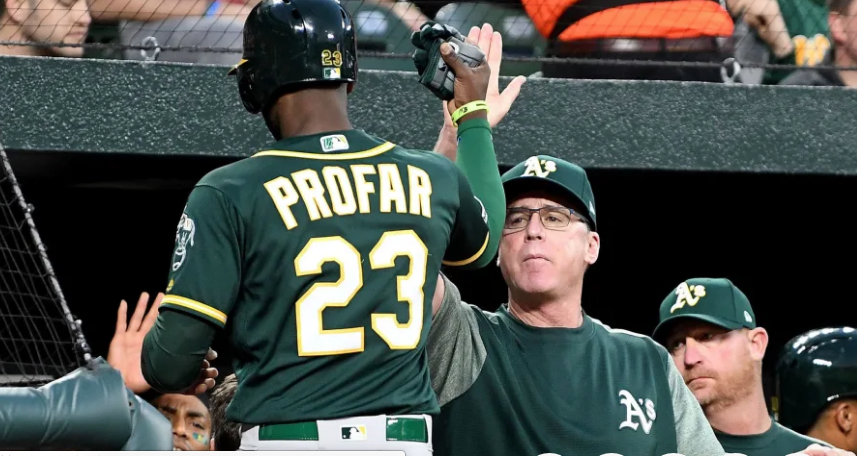 April 10, 2019 — The A’s came back and dominated the Orioles Tuesday night in Baltimore 13-2, after a tough loss Monday night 12-4. It was a night filled with errors on the Orioles side.

Tuesday night was the rookie Orioles pitcher John Means’ career start and the A’s scored three off him in the second inning. Unfortunately the first two scores weren’t Means’ fault. Third baseman Hanser Alberto had two throwing errors, one led Chad Pinder to score, and another allowed Jurickson Profar to second. Once Marcus Semien was at bat with Josh Phegley on first and Profar on second, he hit a double home run, bringing the score 5-0.

Profar had four hits including a home run at the top of the seventh. His hit helped to set the tone for the rest of the game. When Profar was at bat at the top of the eighth Mark Canha and Pinder were set up on second and third base. Profar singled right, both Canha and Pinder scored. Phegley doubled to the left, Laureano scored and Profar was on third. Semien hit a sacrifice fly to center and Profar scored. Back to back to back hits on Miguel Castro.

“I just tried to get the bat on the ball,” Profar said. “I wasn’t thinking about getting RBI, just about getting on base. Every at-bat you have to try to do something to help the team. Tonight, I was getting the hits.”

Top of the ninth Castro committed two balks, which was a new concept to me. The terminology in baseball takes some time to get used to.

Tonight 4/10, the A’s dominated the Orioles again early on, winning 10-3. Khris Davis did not play on Tuesday night, but he returned tonight with two home runs and two hits. Davis hit the two homers late in the fifth inning to bring the score up 7-0. The A’s started off rocky against the Orioles but it feels like they will wrap up the series Thursday morning.

“That’s a lot of homers,” Oakland manager Bob Melvin said. “Once he established himself, and certainly once he got here, he’s become one of the elite power hitters in the game.”

Pinder had a solo homer, Profer and Chapman also homered. Chapman, who went 3 for 4, had an RBI double and scored on a single by Davis. The Orioles have allowed 23 home runs over six games of the homestand against the Yankees and Athletics. (ESPN.com)