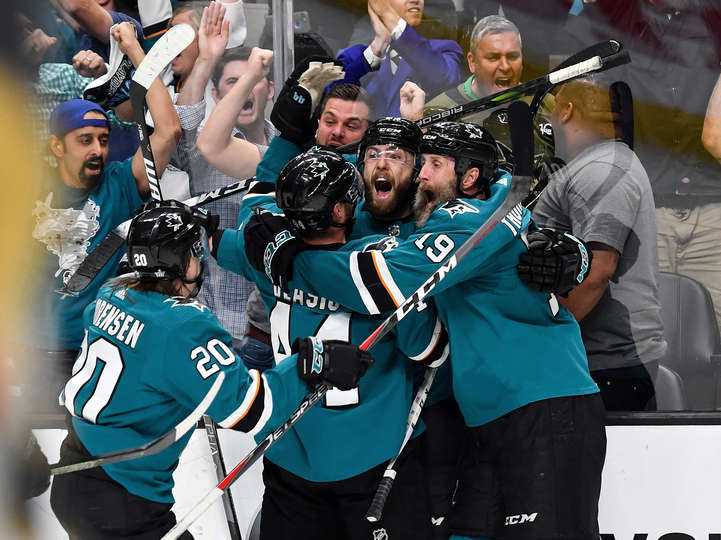 April 24, 2019 — What a thrill of playoff games across the sports worlds! Sharks came back from being down 3-1, Nuggets dominated the Spurs at home and the Blazers….lemme just drop this highlight:

Blazers led the series 3-1 and needed to win this home game for the win. The Thunder led the game from the beginning and I started to think the two were going to head to seven games. But, leave it to Damian Lillard to score a sweet 50 points and beat the Thunder 118-115. His 30-foot three-pointer sent the Thunder back to Oklahoma. “There was some talk, some back and forth and that was the last word.” (Lillard in post game interiew).

I wish Russel Westbrook (29 points, 14, assists, 11 rebounds) and Lillard were mic’d up during this series, their conversations on the court looked like the best kinda smack talk #playoffs. Paul George also had 36 points, eight rebounds, but it still wasn’t enough to hold off Dame Time.

The Blazers will face either Denver or the Spurs in the second round. (I predicted Spurs to win but who knows!)

Last year the Golden Knights went to the Stanley Cup Finals and lost to the Washington Capitals 4-1. Last night, the Sharks came back from being down 3-0 and beat the Knights in OT 4-5. This matchup was between the two best in the West and their seven game series did not disappoint.

The Knights were leading the entire game, until the third period when Knights center Cody Eakin cross checked Sharks captain Joe Pavelski and was issued a five-minute major. Pavelski left the ice with a head injury and blood on the ice.

Within those five minutes a fire sparked among the team and they scored four goals in four minutes. Logan Couture scored the first goal, followed by Thomas Hertl, Couture and Kevin Labanc. Near the end of overtime, Barclay Goodrow scored the final goal to win for the Sharks.

I’m going to admit, I didn’t believe the Sharks were going to pull through one, if any goals in this game. I know Knights fans are claiming that statement to be true as well, and will repeat the fact that the Sharks ‘couldn’t score until they [Knights] were one man down.’ The Golden Knights clearly were not a fan of the penalty call after the game.

“It’s just like the Saints. It changes the whole outcome,” Marchessault said. (Abdeldaiem, A. via http://www.si.com)

Great season by the Knights and I’m looking forward to the Sharks taking on the Colorado Avalanche Friday Apr. 26.

Denver played hard in the Mile High Arena Tuesday night, Nikola Jokic (16 points, eight assists, 11 rebounds) and Jamal Murray (23 points, seven assists) set the tone for the team early on. “Their chemistry is almost romantic,” Nuggets coach Michael Malone said. “They care about each other, they love each other. They play for each other. That’s when we’re at our best.” (ESPN.com/Associated Press)

This quote definitely describes how the game went Tuesday night. The Nuggets played in unison, took their open shots, and made them.

By the second quarter the Nuggets were up by 16 and it was hard for the Spurs to come back from behind. The Spurs sort of gave up towards the end of the fourth. I believe they are banking on a win back home, but the final game will take place in Denver if that happens.

I originally predicted the Spurs to win this series but after the rhythm that took place in Denver I might sway in the other direction. Game six will take place Thursday night in San Antonio and will be very exciting!