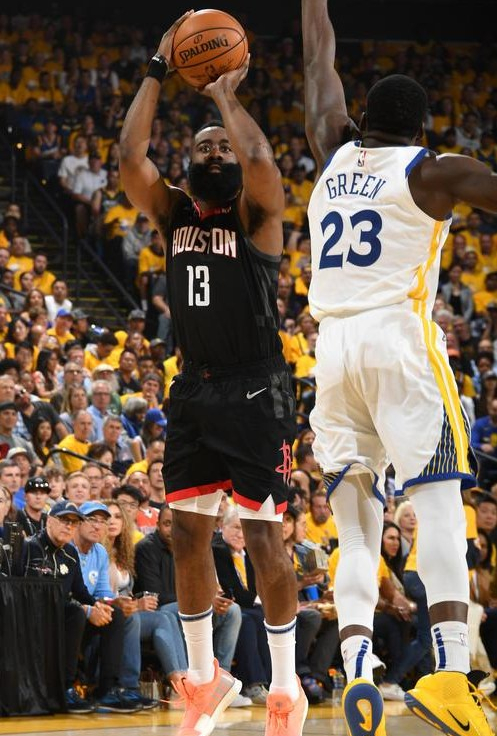 James Harden shooting a three-pointer against the Warriors in Game One of the 2019 Playoffs. (Photo by: Andrew D. Bernstein/NBAE via Getty Images)

Round two of the playoffs have kicked off and the infamous James Harden was beyond upset with the way the game was called against the Warriors. He explained during his interview that there were multiple shot attempts that should’ve been fouls and were not.

I just want a fair chance man. Call the game how it’s supposed to be called and I’ll live with the results.

As we all know, social media has its pros and cons. For sports fanatics, we use social media to research, resurface and create GIFs of replays to prove a point. This clip from a famous YouTuber for example, shows Harden shooting three’s during the three-point contest. No flailing around here:

The con to social media is of course the smack talk, backlash and hate we all get from opposing fans worldwide. Some may say he isn’t trying to beat a defender so the extra effort isn’t necessary – but are his legs kicking out after a shot required when there is?

Since game one the media has been buzzing as to what is the “proper landing zone” for Chris Paul and Harden. The three fouls Harden wanted against Klay Thompson should have been given to him, I agree to that. I believe Thompson is a fantastic defender, but when it comes to guarding Harden he shouldn’t be put against him. Rather than simply stepping away and letting him shoot, Thompson continues to get beat on the dribble and jumps into him when he shoots, as seen below:

The fourth foul Harden wasn’t given by Draymond Green during the first half was also a foul. It’s hard to judge when Harden has a tendency to throw his body around but these four fouls should’ve been given to him. 12 extra points the Rockets could’ve potentially had. I feel Andre Iguodala is the best to guard Harden because he doesn’t go up with him when he shoots and he plays tight defense on him. Thompson gives him a little too much space which causes him to step in once the shots are taken.

This game didn’t feel like much of a playoff game to me, I wasn’t planning on writing about it until all the chatter of the play calling was released during their interviews. Felt like both teams played at about 85% but the Warriors still came up with a win.

Here is an example offensive foul from the NBA Video Rulebook, looks a little similar to the examples Harden and Paul refer to, no? Game two I believe the defense is going to act a lot smarter when Harden goes up for a three. I think Houston need to focus more on the game when it comes to beating their rivals, so tomorrow is going to be a much more interesting game to watch.

I’m gonna wrap this up with a hilarious compilation of Harden and his flops and fouls: