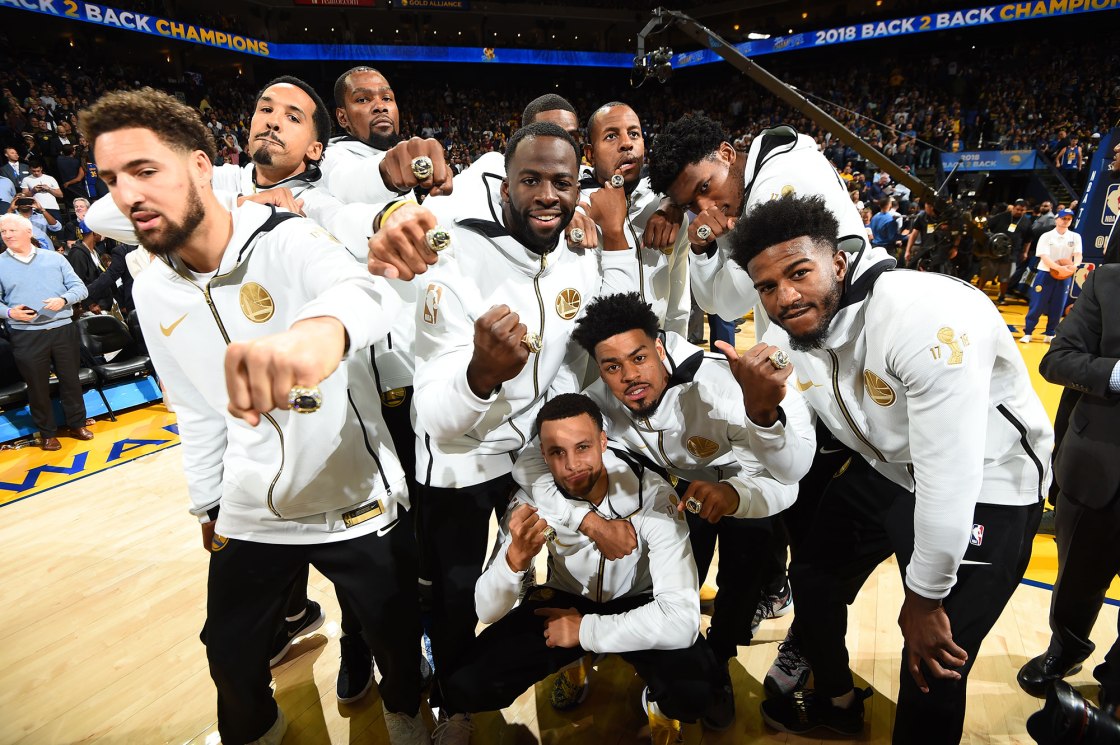 Basketball season is back and the Dubs are back in action! 🙂 Warriors played the Oklahoma Thunder for the last season opening game at Oracle Arena 😢 I thought it was strange the NBA chose this matchup since the Warriors did not play OKC in the WCF last year, which was how the last two years were scheduled. Maybe the NBA has a vision for the Thunder?? FYI, the Warriors lost their last two home openers, last year to the Rockets and the year before to the Spurs.

Warriors were ahead by ten at the half, which is typical. The Thunder came back in the second half, Paul George was running up the score without his partner Westbrook, bringing their lead to six. Fourth quarter the Warriors got their rhythm back and dominated the floor. In the end, they won on Wednesday night, 108-100.

Prior to the game, the Warriors held the Championship ring ceremony and the arena was booming.

Just in case you missed the ring ceremony, here is a video from Rachel Nichol’s Twitter:

So here’s the deal with the reversible championship rings that none of the folks trying to demonstrate them on TV tonight can actually seem to reverse…supposed to represent the Dubs winning back-to-back titles. pic.twitter.com/7i6fkbrFKl

Whether you love or hate the Warriors, you gotta admit you watch the games in your free time. I’m biased because I’m from the Bay, so I have tons of love for the vibe the team has. I am very depressed at the fact they are leaving Oakland, along with the Raiders, because now the ticket prices are about to SKYROCKET & we all know California living ain’t cheap. I thought it would make more sense to rebuild the existing arena and use some excess money to build some bars and restaurants around there, but that’s just me…

I can’t wait to watch the Warriors again for their final year in Oracle, hopefully I can attend a few and post some pics on here.