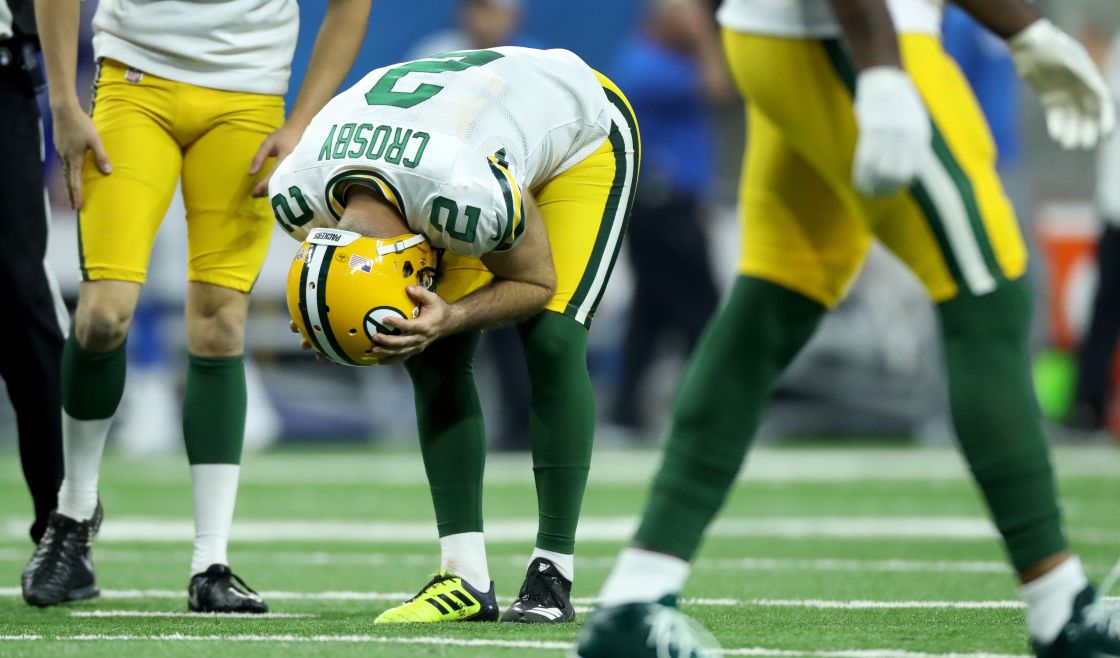 Tis the Season for Missed Kicks

Mason Crosby had a brutal day kicking for the Green Bay Packers, missing five kicks in a one-possession loss to the Detroit Lions. (Getty,sports.yahoo.com)

February 15, 2019 — I obviously had to write a post on the worst kicks from the season because being a kicker ain’t easy. Opposing teams sort-of depend on icing the kicker, so he misses the following kick. This season that tactic worked fairly well; there were far too many crucial missed kicks. It’s pretty crazy that the final moments of a game depend on the accuracy of a 43+-yard field goal attempt.

From the beginning of the season when the Steelers and Browns tied the game in OT in Week 1, to the disappointing Wild Card loss for the Chicago Bears, kickers have a lot of room for improvement. Here are some of the most devastating missed kicks of the season:

Steelers vs Browns Week 1:
Once WR Josh Gordon tied the game up with about two minutes in the fourth (tbt to that), both teams were unable to hit a field goal in OT, ending the game in a tie. Chris Boswell kicked at the 42 yard line and former Browns kicker Zane Gonzales attempted at the 43 but was blocked; pretty rough way to start the season.

Browns vs Saints Week 2: Browns again! Gonzales missed seven points this game: a field goal, and two extra points, the last one was for the lead. With :08 seconds left in the fourth, Gonzales missed another crucial FG from 52 yards out, he hit the air wide right.

Packers vs Vikings Week 2: 🤦 this was such an unfortunate tie for the Packers. Aaron Rodgers was leading the Vikings the entire game until Kicker Mason Crosby missed the winning FG during the fourth. He was iced at his first attempt and missed the second kick. Once the teams headed into OT both Crosby and Daniel Carlson missed a chance to win the game upon their possessions. Unfortunately for Carlson, after his poor 0-3 performance the Vikings released him and signed veteran Dan Bailey as his replacement.

Here are all the Week 2 missed Kick & FG highlights to make you laugh, courtesy of NFL & YouTube:

Crosby also missed five kicks against the Detroit Lions….That was a rough game to watch, Rodgers was sacked on the first possession and didn’t return for the entire game because of concussion protocol.

Ravens vs Saints Week 7: The Ravens were trailing the entire game until the final 30 seconds and a TD catch by WR John Brown. Following the TD, Justin Tucker missed the extra point to tie the game…

Cowboys vs Redskins Week 7: Cowboys were down by three with three seconds left on the clock and simply needed a FG from 47-yards to tie the game. As K Brett Maher waited for the snap the Redskins were off-sides, but who got the five yard penalty? The Cowboys. The call was a snap infraction;  L.P. Ladouceur moved the ball causing the Redskins defense to cross the plane before the play started…(isn’t that what an offside call is?)

“The illegal ball movement by the center in #DALvsWAS causes the defense to come across the neutral zone and contact a lineman.” -AL pic.twitter.com/Cv8Ugwb99p

I think this call was completely wrong, but because of the flag the Cowboys moved back to the 52-yard-line and Maher’s kick hit the left post. The NFL rule book states that any form of movement prior to the snap by the offense that insinuates the beginning of a play is a false start, after the ball is set. Seems like snappers move the ball all the time but hey, rules are rules?

Broncos vs Texans Week 9: Denver came back in the fourth only down by two. QB Casey Keenum threw an 18 yard pass to Emmanuel Sanders and after a few more plays and a failed third down conversion, K Brandon McManus attempted a 51-yard FG & the poor guy missed; his kick was wide right (like wide).

Cardinals vs Packers Week 13: This 49-yard attempt would’ve tied the game, but Crosby failed again. 2018 just wasn’t the year for the Packers; I personally feel like Rodgers is too arrogant now & it shows since HC Mike McCarthy was fired after this loss.

After all this kicker bashing, Katie Nolan had those who tweeted about College Football kickers fly to LA to show their skills. All these guys tweeted “I could’ve made that kick,” so she put them to the test.