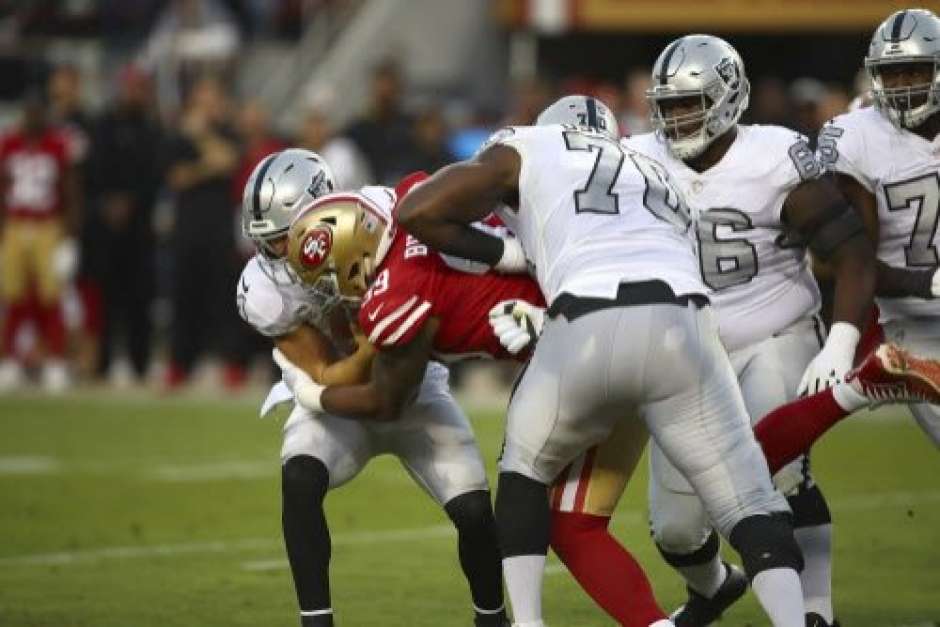 November 2, 2018 — The Battle of the Bay took place in Santa Clara on Thursday night and the Raiders played pretty terribly. The 49ers on the other hand, started their third string QB Nick Mullens who made an outstanding debut.

Going into the game, both the Raiders (1-7) and 49ers (2-6) held the worst records in the NFL, (along with the New York Giants, 1-7). It’s disappointing to have both the teams in the Bay come out on the bottom this season.

Mullens went OFF with a final score of 34-3. The Raiders scored a field goal on their first drive…

Derek Carr…two years ago fans and analysts were praising his name. He led the team to a 12-4 record and wrapped up the season with close to 4,000 passing yards and 28 touchdowns. As of yesterday, he has over 2,000 and 10 touchdowns. He was fierce in the pocket and his decision making skills on the field were dynamite. Last night Carr played as he has all season, faulty with strange play-calling and short passes.

There has been a ton of turnover in the Raider locker room which is never easy to deal with, “I thought we would be playing together for the next 15 years,” Carr said in an interview regarding the Amari Cooper trade.

The fault is not only on Carr, it includes the defense as well who haven’t been the best all year and allowed 34 points to a team that was averaging about 21 per game.

Jon Gruden said one comment that really stuck to me during his post game interview: “We are going to build a championship team here.” Okay Gruden, what about today’s game? The season is still ongoing, why simply place all focus on the future? What about the fact that Derek Carr was sacked seven times. Granted two of those sacks were Carr’s fault, one of them, shown below, he ran right into the oncoming defender:

I’m not saying Gruden told Carr to throw this game for another first round draft pick, but it sure felt that way.

Now that we discussed another poor performance from the Raiders, let’s highlight Mullen’s on his stellar performance. Mullens completed for 262 yards and three TDS for his first night on the big screen.

Jimmy Garoppolo is out for the season with a torn ACL in his left knee, second string C.J. Beathard injured his throwing hand on Sunday, so that makes Mullens next on the starting lineup.

On the 49ers first possession the run game was on point, the chains kept moving down the field. As the 49ers reached the Raider 32 yard-line Mullens comes out of the pocket on the right and throws a touchdown pass to the wide open WR Pierre Garcon.

After that, Mullens made some big plays down the field and the next thing you know the score was 17-3 by the half. By the end of the game, Mullens was Twitter verified and gained 10,000 followers. Although it is not confirmed, it will be exciting to see which QB coach Kyle Shanahan chooses in the upcoming games.